Skip to content
Today we took a little jaunt into central London (while I can still call it a little jaunt, before we move and it becomes a mammoth journey) for a special preview screening of the upcoming film Oddball And The Penguins. It’s such a cute film about a Maremma sheepdog who becomes a guardian to an endangered colony of Australia’s penguins and we all thought it was fantastic. So fantastic in fact that we didn’t stop talking about it all the way home!
Due to be released on the 12th February in time for half term, this true story from the land down under is thoroughly heartwarming and often brilliantly funny too. Florence (Jimmy was a little under the weather so stayed at home with Daddy) was well and truly captured by Oddball and his beautiful story as were me and my Mum! We thought it had a little of everything really with laughs, a gentle but adorable story and a little tear here and there too. We think it’s gonna be a big hit this half term holiday for families.
Oddball and the Penguins is shot entirely on the beautiful Australian coast near Melbourne making the back drop absolutely stunning visually and ensuring that I definitely want to visit Australia! The story is set around a sleepy Australian town with an island out to sea that can be walked to through the shallow shores. Middle Island is also home to fairy penguins and here is where the story starts… With magnificent characters in the penguins and Oddball the film is a sure fire hit regardless but couple it with the actors who are relatively unknown in the UK but absolutely terriffically cast, you have an absolutely outstanding film.
Up-and-coming Australian star Shane Jacobson (“Kenny”), Sarah Snook (“ellent pSteve Jobs”, “Predestination”) and Alan Tudyk (“Frozen”, “I, Robot”, “Death at a Funeral”) were perfectly cast and gave outstandingly believeable performances. They were touching and portrayed the story as if being read to by someone with a charmingly beautiful voice.
We truly loved this film which for all it’s many attributes is essentially just a great tale! A real life fairy tale brought to the big screen. I generally enjoy Australian film and this one is no exception! A half term must for the whole family! 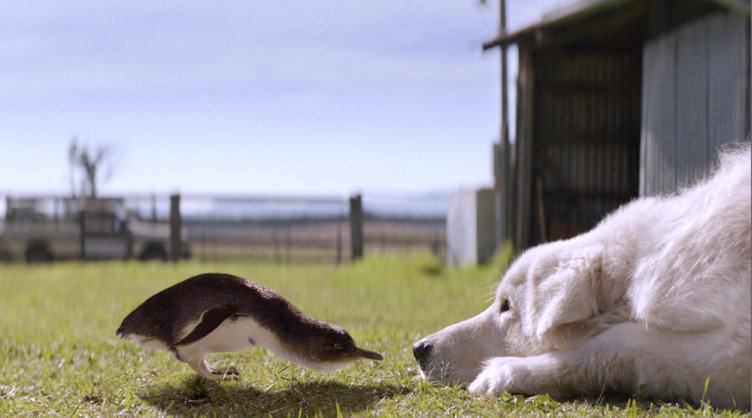 Off the coast from the small town of Warrnambool lies Middle Island, a sanctuary once home to thousands of the world’s smallest penguins. But since foxes learned to cross the shallow channel to the island, penguin numbers have plunged. And if they fall below ten, park ranger Emily Marsh will be out of a job. This shocks her father, eccentric chicken farmer Swampy Marsh. His wife ran the sanctuary, but when she passed away, Emily stepped in, while Swampy retreated to his farm. Emily’s nine-year-old daughter Olivia is the glue that keeps the family together.

And at the centre of everything is Oddball, Swampy’s rambunctious Maremma sheepdog. After Oddball goes on an off-leash run that nearly destroys Main Street, tensions rise. If the sanctuary closes, Emily plans to take Olivia and move away with Bradley, an American tourism consultant. So now Swampy might lose his daughter and granddaughter as well.

The solution comes when Swampy rescues an injured penguin from the island and discovers to his amazement that Oddball – who can’t bring himself to guard chickens – is an expert at guarding penguins. With two weeks until the final penguin count, Swampy and Olivia devise a crazy plan – train the rambunctious and unpredictable Oddball to protect the penguins and save the sanctuary, while somehow keeping the operation a secret from everyone.

Will Emily discover the truth? What about the suspicious Dogcatcher? And who is the shadowy person trying to make sure the sanctuary closes?

We were invited to see the film in return for an honest review and it’s out now on DVD, On Demand and Digital HD.